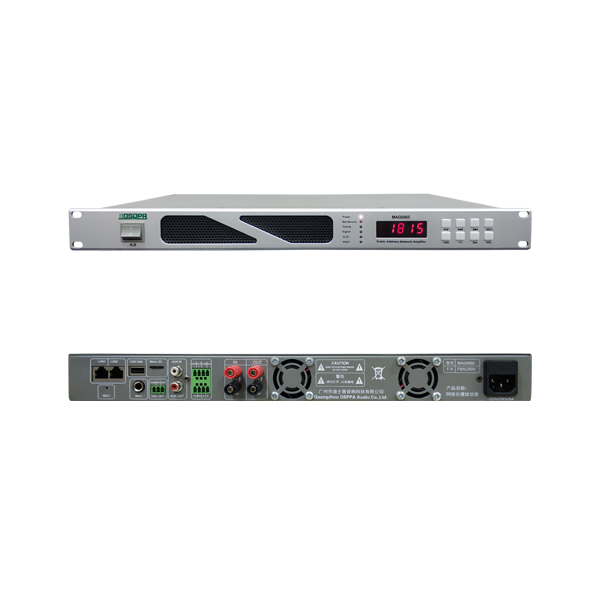 ● This machine is made of high-grade aluminum-alloy drawn panel.
● It is allowed to suspend the machine any place accessible to the network. The network transmission protocol developed independently by DSPPA network team to achieve the dynamic audio data transmission. With the double network interface redundancy design, it is possible to work crossing the network segments.
● There is the built-in high-efficiency digital power amplifier with 100V constant voltage output, resulting in the efficiency higher than 90%.
● There are the MP3 player, USB port and SD port, which are used to play the local programs.
● The maximum output power of the amplifier shall be 60W, 120W, 250W, 350W, and 650W respectively.
● The eye-catching design of the digital display screen is able to display not only the time of the clock, but also the time of the playing progress.
● With the time frame synchronization mechanism, it achieves the real-time synchronization of the clock of the machine and the clock of the networked host.
● This is the built-in infrared receiving module under the control of the infrared remote controller, so it is easy for use.
● The panel integrates five status indicator lamps to show the working conditions clearly.
● On the panel, there are eight shortcut buttons, facilitating the daily use of the local user.
● It has the built-in offline local timing-point playing function, so as to back up and store the timing programs into the SD card, and back up the timing-point programs automatically.
● Outside the machine, there is a channel of AUX line input, a channel of microphone input, and a channel of AUX line output, in order to facilitate the expansion of the other local sound source broadcasting and expansion of local power.
● It has the priority management function at the level 8 or above; the local microphone is equipped with the mute adjustment potentiometer to adjust the volume of the mute level.
● Outside the machine, there are the two kinds of powerful broadcasting output interfaces including EMC 24V and short-circuit dry contact, which are used to connect the audio controller of the loudspeaker, or to connect the intelligent power supply.
● It is equipped with the peripheral equipment expansion interface, which is used to connect 86-box on-demand playing color screen, connect the double 86-box help intercom panel and dual-purpose intercom panel, or connect the Bluetooth audio receiver.
● Function of playing on demand: After connecting the 86-box on-demand playing color screen, it is possible to achieve the local on-demand playing of the mass program library of the host.
● Function of paging: After connecting the 86-box on-demand playing color screen, it is possible to implement the real-time paging for the selected zone.
● Function of intercom: After connecting the help intercom panel, it is possible to achieve the function of help intercom.
● Function of Bluetooth audio receiving: After connecting the Bluetooth extender, it is possible to receive the blue-tooth audio, so as to enable the school and marketplace to achieve the local wireless loudspeaker sound amplification with the Bluetooth wireless microphone.
● There is a mixed relation between the external line input and the program source for network playing. The local microphone and AUX input will turn on the power amplifier by detecting the size of the input signal.
● It is allowed to tailor the linkage trigger function and 100V local emergency line input, in order to facilitate the access to the local firefighting address system.
● It has the networking playing function, so that it is possible to play the program source distributed by the networked host or audio stream of the networked audio collector.
● It is possible to play the background music, emergency paging, and alarm signal from the system host. The network program source has the priority management function at the level 7 or above, and it is classified into the background broadcasting, business broadcasting, and emergency broadcasting.
● The decoding chip with high-definition CD tone is used to support 16-bit MP3/WMA/WAV/PCM audio stream data decoding with sampling rate at 48KHZ to the maximum extent.
● Fully digital design with advantages such as high performance, high definition, and high audio transmission indicator.
● There is the built-in watchdog function to guarantee the normal operation of the equipment effectively.
● Due to wide range of the working ambient temperature, the industrial-level chip design is adopted to adapt to the outdoor installation and use.
● There is the built-in DSP sound effect processing chip to achieve the function of high and low pitch adjustment, so it is applicable to compensation in different environments so as to further improve the broadcasting indicator.
● The high-performance network processing chip and independently developed real-time processing system are used, so that the Boot time is less than 0.1S, and the time for connection with networked host is less than 2S, resulting in the high real-time capacity; the time delay for broadcasting of real-time program is less than 0.2S.
● The self-developed real-time operating system has strong real-time performance, and the broadcast sounds of multiple network players broadcast programs are synchronized in real time, and there is basically no time difference between them.
● The independently developed network data stream decoding algorithm, microphone paging, and external line broadcasting are used to realize the strong real-time capacity. The time delay after keeping the paging state for more than 24 hours will be less than 0.5S.
● The independently developed network data correction algorithm is used to guarantee the accuracy of the received data while guaranteeing the real-time of the data transmission, so that the operation is stable and reliable.
● The local output volume and local playing status are controllable.
● The source priority and priority depth of the network source, local line source, and local microphone source can
● be set via the network. 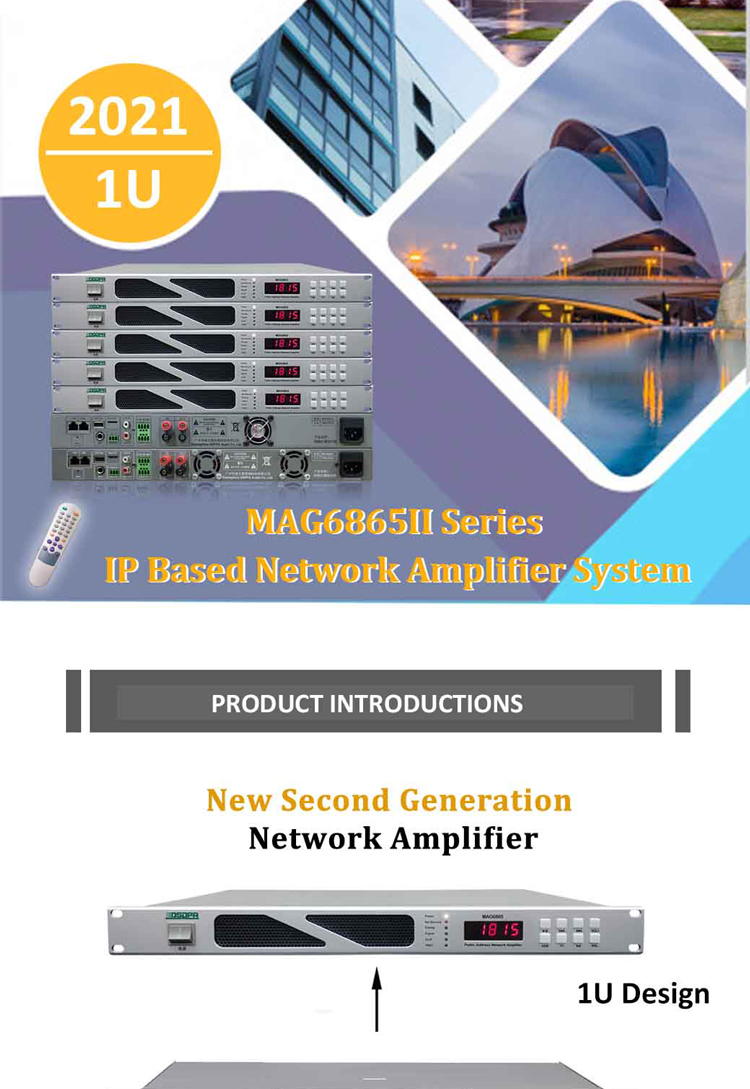 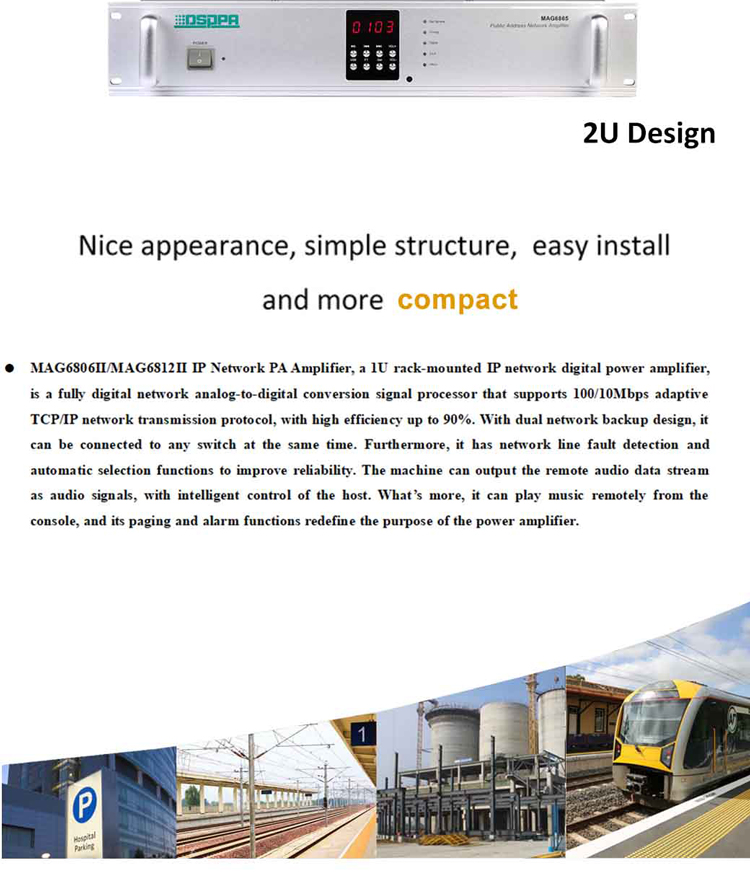 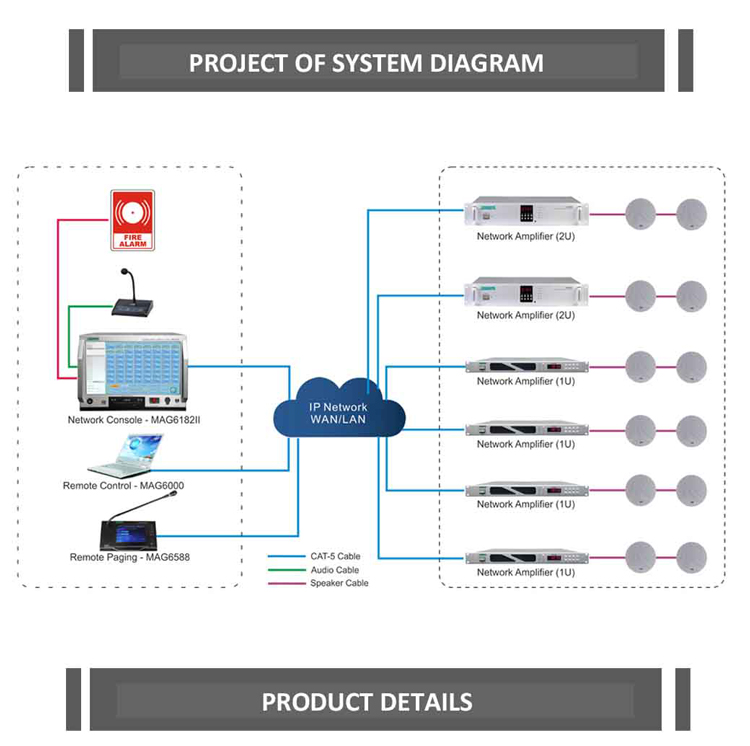 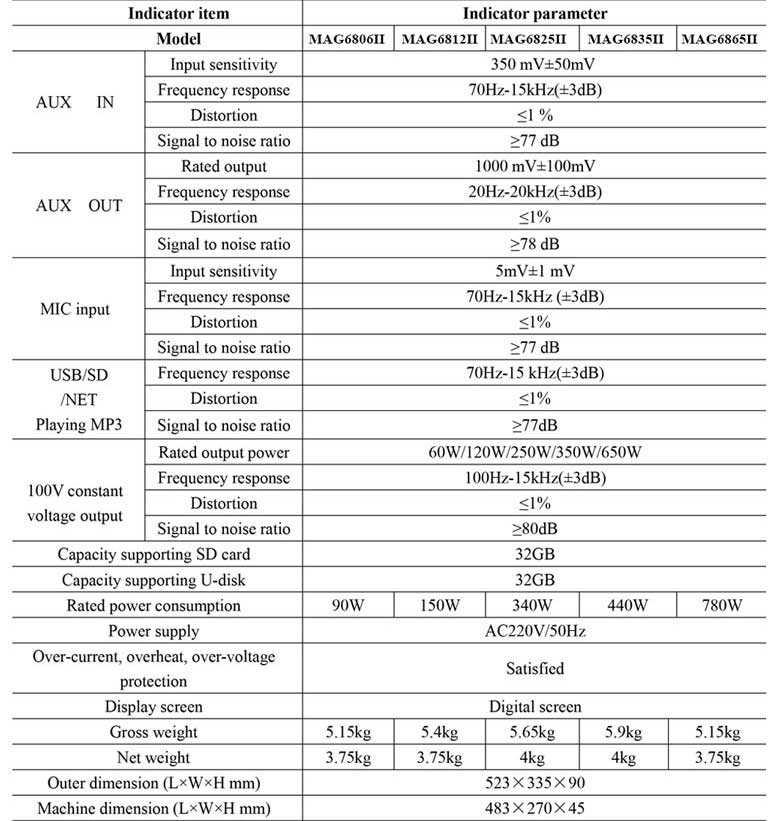 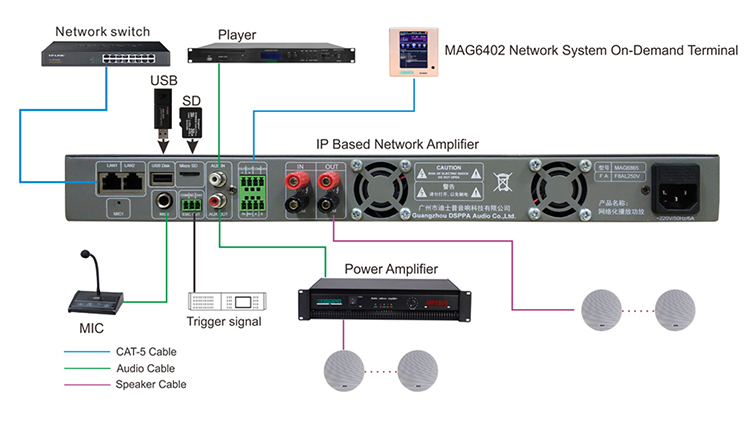