A medium-sized shopping mall with a business area of about 5,000 m2, integrates clothing shopping areas, living shopping areas, entertainment and leisure areas, parking lots and other areas. In order to create a better leisure shopping environment for customers, we have selected an integrated network system with background music and radio, which can not only allow customers to enjoy shopping, but also meet the needs of staff in the shopping mall for notes broadcasting and promotional advertisements, and emergency broadcast, as well as one-button trigger alarm and fire linkage in all zones for effective evacuation and personal safety of customers. 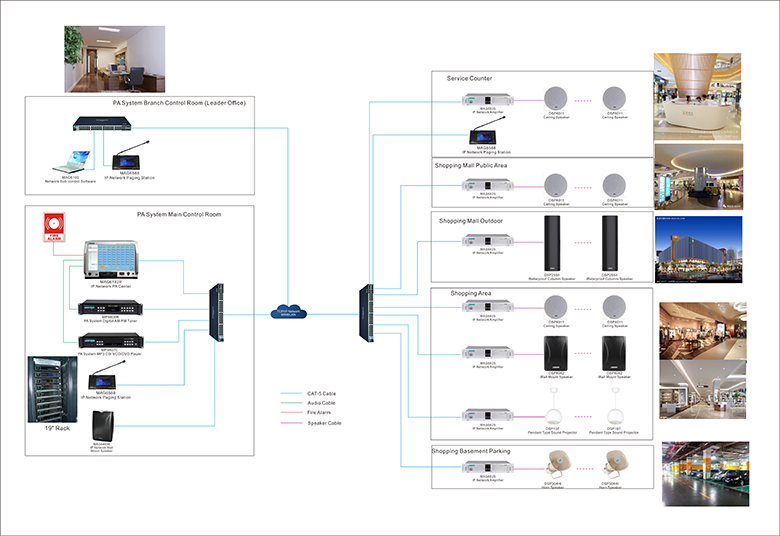 The system can automatically turn on and off the power supply of the equipment according to the settings, with multiple sets of schedules and 24 hours programming (accurate to seconds). The humanized MP3 and radio program can be played automatically, with different MP3 musics and television programs in rest time set every day, creating a warm environment for the shopping mall. The schedules can be adjusted automatically according to the season, with special configuration options of weather and holiday. Meanwhile, the emergency program can be used in special time or emergency.

With the remote control and paging functions, the administrator can issue the management information to the shopping mall in his own office, without the need to go to the computer room; use the remote paging station to broadcast to any point or zone or all zones of the shopping mall. It breaks the tradition that the administrator must get to the computer room for broadcasting to offices.

As the public address system is equipped with the network paging microphone, the staff in the service desk can initiate a paging or broadcast to one or more zones through the microphone.

The public address system is equipped with a variety of audio sources, including CD, MP3 and digital radio. Through the control software, it can realize the real-time broadcast, which can be broadcast to relevant zones or all zones, meeting the diversified broadcasting needs. Meanwhile, the network multimedia programs can be broadcast via network.

When an emergency occurs, it can broadcast emergency broadcast information in time, and other functions of the public address system (background music and general broadcast) will be suspended, to quickly evacuate the crowd, guide the direction of personnel evacuation, and ensure the safety of all personnel, until the emergency broadcast state is removed.

8. Network monitoring of broadcast content and volume of each terminal: