This office building has 7 floors and 1 parking lot, with construction area of about 5750m2. It aims to have the following functional characteristics:

1. The office building adopts an advanced fire alarm system with multiple audio outputs. For example, when a fire occurs, it can broadcast the command voice to guide personnel evacuation in the fire areas quickly, and broadcast the early warning voice information in the adjacent areas.

2. In order to ensure the stability of the system, the system must take emergency measures, such as line quality detection and historical information recording.

3. The background music playback and broadcast functions can not only effectively relieve the work pressure of office workers, creating a harmonious and happy working environment, but also broadcast paging in different zones.

2. Fire linkage: An alarm voice can be issued in time when disaster information is received.

3. Remote paging: You can page a single zone or multiple zones in the office building.

6. DC24V emergency power supply: The system can be powered by AC and DC24V power. It can automatically identify the power supply and switch between them, as it has AC and DC power connection detection and warning. Generally, AC power is the main power. 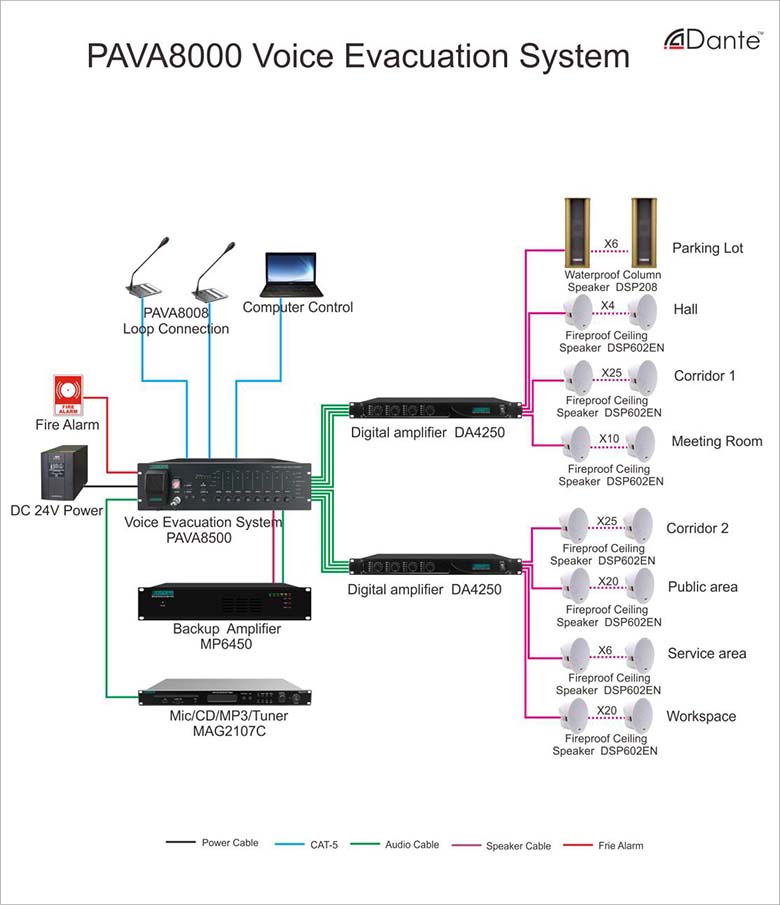 In order to increase the survival method of office staff in the office building in the event of a disaster, the system can enter the alarm test and drill mode through shortcut operation, and the alarm will be released after it ends.

The system can compile the alarm area combination through the control software and download it to the main controller. When alarming, the main controller can control each area to enter the evacuation or early warning state according to the pre-programming. At the same time, the alarm voice signal generator will broadcast the voice prompt signal to broadcast the evacuation or early warning voice in the corresponding areas.

In this system, voice broadcast has the highest priority, with voice alarm priority over background music priority. It can broadcast directly or broadcast the recorded voice signal to any terminal combination. Multiple paging stations can be set with different priorities according to the serial number, up to 32 remote paging microphones.

You can remotely detect, control and set audio priority, view running records, and set impedance detection parameters in the office through computer software.

It can provide background music when there is no fire alarm in the office building. Different program sources can be selected for different zones through the control software and main controller.

Note: This table if for reference only.