DSPPA Intelligent public address system is a set of embedded public address system with powerful digital broadcasting matrix system function and modular construction, which has changed the manual control mode of the traditional public address system, and the whole process is controlled, managed and played by the computer. The system also makes use of the latest modern technology, fully considering the development needs. It not only reserves various interfaces to facilitate the expansion and upgrade of the system, but also can switch various audio sources and various playback areas to achieve the effect of playing different audio sources in different playback areas. 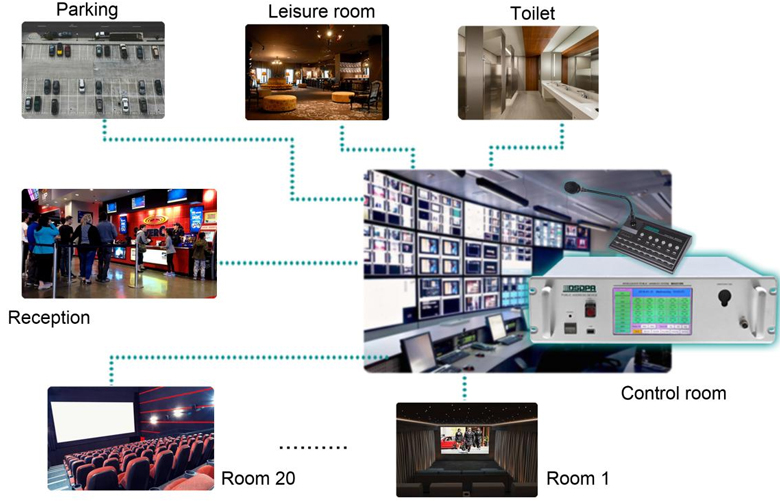 MAG2120II (MAG2140II) is a powerful intelligent PA system center. It is an 8x20 (8x40) audio matrix. It has all the functions needed for a normal PA project, such as background music playing, programmed audio playing, remote paging, fire alarm, etc. 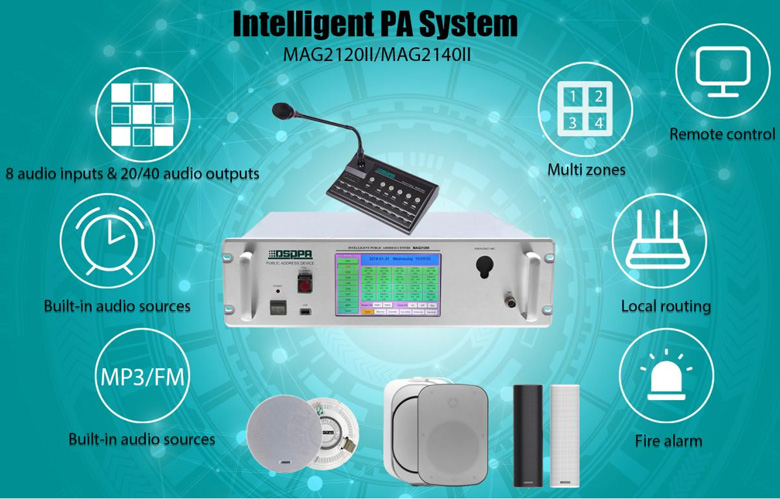 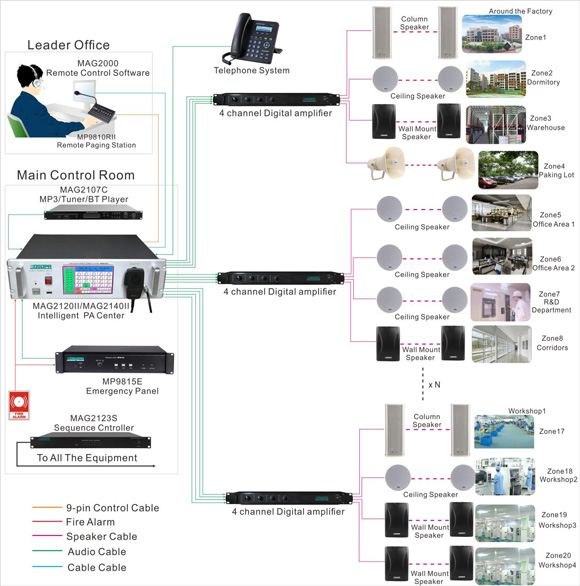 Each zone can be linked independently with control panel and remote volume control of sound source; control panel with PA, remote paging & BGM.

● Playing Background Music and Timing Function
According to the needs of factory management, the system can be preset to play a timed playlist for one day or one week and play the commute ring regularly; It can manually and automatically control the switch of each zone of the system and manually control the volume of the system. The system can automatically switch on and off at regular intervals, which not only saves energy but also prolongs the service life of the equipment.
● Information Dissemination
Using the background music broadcasting system to broadcasting the latest situation of factory, etc.
● Broadcasting Notice at the Management Office
Using the local broadcast microphone and remote paging microphone to broadcasting notice and people finder, etc.
● Zone Broadcasting Function
The host (intelligent control center) is not only equipped with a 7-inch touch screen, which is separated from the traditional physical button operation, and the operation is simple and convenient. It has 8 audio inputs and 20 (40) audio outputs zone interface, which can be scheduled broadcast, manual zone broadcast or whole area broadcast.
● Voice Broadcasting
The public address system is equipped with a paging microphone MP9810RII, which is mainly used for the management personnel to give friendly reminders and warm greetings in different functional areas during normal work time and rest hours. In emergencies, it can be used as a guide for refuge, orderly transfer, etc. It can be operated quickly and effectively through paging calls according to the on-site situation.
● Adjacent Floor Emergency Broadcasting
When an emergency occurs, the emergency broadcast information can be played in time, and other functions of the public broadcasting system (such as background music, general broadcast) will be suspended, which can quickly evacuate into the group and guide the evacuation direction of personnel.
● Fire Broadcasting
The host MAG2120II/MAG2140 has a 20/40-way fire trigger interface, which can be linked with the fire system. When an emergency such as a fire occurs in the area where the floor is located, a certain zone of the host receives an alarm signal from the fire protection system, then the zone will trigger a preset alarm voice (alarm voice can use the built-in alarm voice of the host, or can be recorded in advance and input externally through the MP9815E). It can prompt personnel to do evacuation work and can command evacuation through the host's own emergency microphone or paging microphone MP9810RII to minimize the damage caused by the accident.
● Telephone Broadcasting
The leader in the company can use mobile phones, landline telephone and other telephones to broadcast and issue notices to factories remotely. 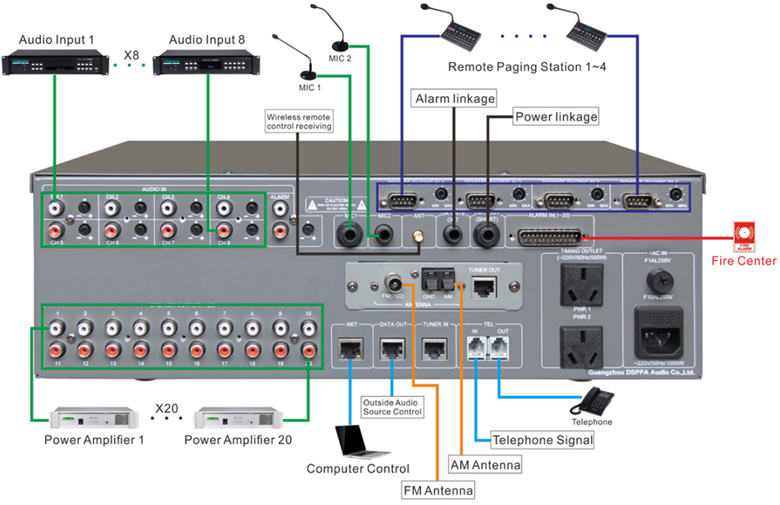 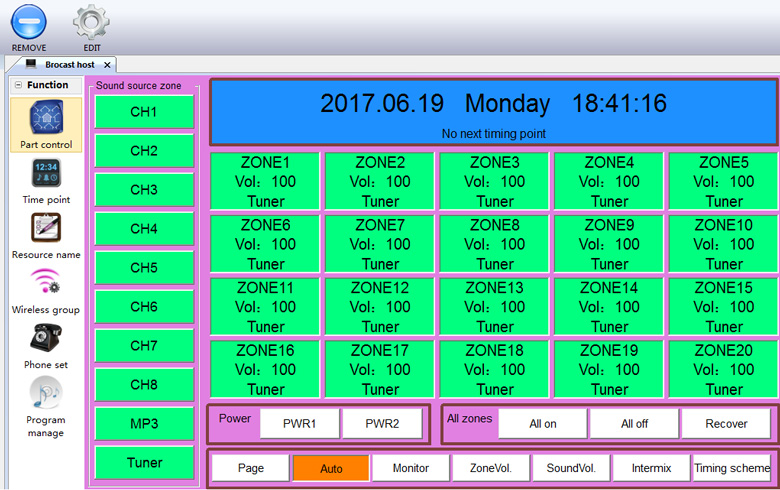 The system control interface is as shown above. On this interface, the user can complete the audio matrix settings, that is, distribute 10 audio sources to 40 zones (20 zones for MAG2120II). The operating method of the zone sound source is the same as that of the host,

Feature：
● There are 5 timing schemes and 500 timing points for each timing scheme, for cycle on a 7-day basis. Each timing point is available for control of audio source selection, bell, built-in MP3, built-in AM/FM, 2-channel power supplies, 4 external peripheral audio sources (CD, tuner, socket and MP3 program player). The 5 timing schemes can be switched easily.
● It is a large audio matrix with 8-channel common audio source inputs, built-in MP3 and AM/FM, 1-channel local aviation microphone input (with first priority), 1-channel alarm signal input (with second priority), 1-channel remote paging microphone signal input (with third priority), 1-channel phone paging signal input (with fourth priority) and 40-channel outputs.
● 20-channel (MAG2120II) and 40-channel (MAG2140II) fire emergency inputs (short-circuit signal), and 1-channel fire linkage output.
● Can be connected to an external computer through LAN for control of the host via a software.
● Four paging microphones can be connected at the same time, and the remote paging microphone can be extended through the 9-pin port.
● Adopt ARM9 platform, 5-inch color screen and touch pad; real-time monitoring in each zone and with volume adjustment function.
● Can realize 100m wireless remote control with 12 programmable buttons; can realize customized on/off of zone and selection of audio sources and songs with one button.
● With 3 types of bell signal output function (digital volume control).
● With telephone zone paging function (digital volume control, with password alteration, all paging, optional paging and programmed paging).
● With timing control of playing status of external audio source.
● The playback state of external audio sources can be controlled regularly, and all timing programs can be easily manually intervened at any time;