A medium-size restaurant occupies of about 500m², which is divided into four areas: dining area, kitchen area, warehouse, and auxiliary room. The dining area covers an area of about 320m², the kitchen area about 100m², the warehouse about 60m², and the auxiliary room about 20m². In order to make customers more satisfied with the dining environment, an audio broadcast system is adopted to play the background music during dining. Besides, it can broadcast the emergency alarm in a fire with priority function. In addition, it can realize the zone management with zone paging function, and the control panel of each zone can be used for playing background music and paging. 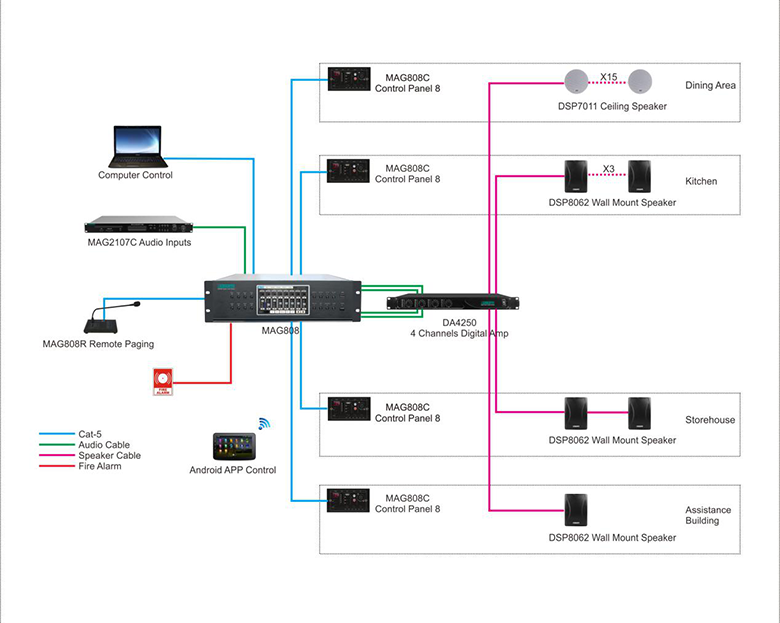 Integrating the digital audio matrix, playback, intelligent timing control, and zone control, the public address system has built-in high-performance DSP, with 10M/100M/1000M Ethernet interface, two local microphone inputs (with phantom power), independent graphic equalizer for each channel, independent volume adjustment, and shortcut keys for zones and audio sources. Besides, it can realize remote control via PC and Android mobile through LAN. It has built-in zone monitoring and built-in 8G memory with a maximum of 32G, and supports AC220 (or 110V) & DC24V power supply.

It can automatically start and stop the broadcast according to the store opening and closing time settings. The user can save the background music frequently used every week on the host, and set the daily broadcast music. If the background musics need to be replaced, musics in the USB can be copied or musics from the Internet can be downloaded.

According to different areas of the restaurant, a reasonable zone management of the whole restaurant can be realized. As for common rear and front zones, the user can play the background music in the front zones or can directly press the button for paging broadcast if he needs to call employees or broadcast in the rear zones; the control panel of each zone can broadcast and play musics on the current zone.

It has a built-in smoke sensor. If a fire accident is found, the fire alarm signal can be sent to the broadcast host for emergency broadcast. It will give priority to the alarm voice set by the system, and guide customers to leave the dangerous site in a timely manner.

The user can mute the background music being played at any time to insert a voice broadcast if he wants to insert and broadcast a notice temporarily. No manual setting required.

Once you have a weekly schedule for playing, you can cycle through the year, no need to reset it weekly. The broadcast control host can automatically be turned on and off to identify the day of the week automatically after powered on, and then call the playlist of the day to automatically play it, which achieves unattended operation.

Note: The table is for reference only.