The public broadcasting system of the large-scale stadium is built to serve the daily humanized services and meet the needs of the sports field for broadcast. It must meet the diverse functional requirements of the sports field, including daily background music playback, and various background music broadcast tasks in different zones, all-weather or timing broadcast under unattended operation, various real-time business broadcasts, overridden fire emergency broadcasts and others, which requires the broadcast system to have high-efficiency stability, comprehensiveness, intelligence and diversity.

2. Remote paging: Broadcast and page any zone through remote paging in the venue property monitoring room.

4. Timing function: The system equipment can be turned on regularly for timing music playback (The overall system is under unified control.). 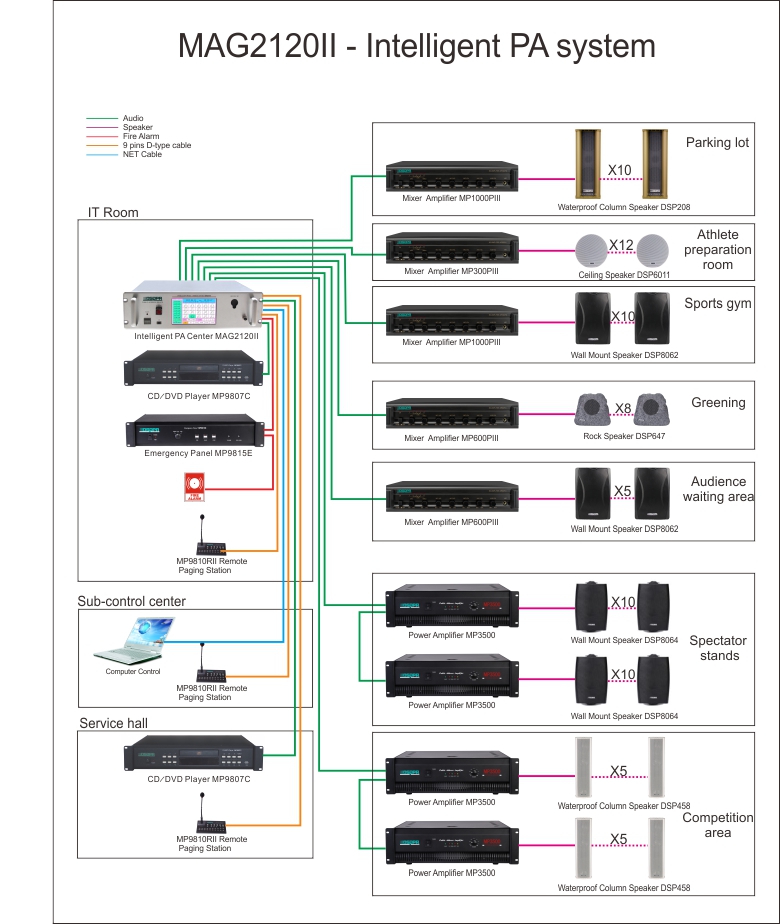 The stadium will be divided into several functional zones, such as surroundings, parking lot, public fitness areas and lawn areas. Each area will be set as an independent zone with independent control and broadcasting. Moreover, it has all-weather timing playback in zones, such as morning and evening radio broadcasts in the public fitness areas, and all-weather background music playback in public lawn leisure areas as well as scheduled broadcasts in the parking lot. Also, it has multiple play modes and built-in schedules which can be edited and replaced by multiple users at the same time, with timing control time accurate to the second. Besides, it can achieve remote control of broadcast under unattended operation.

The system can set several groups to play the scheduled audio programs, or broadcast speech to any designated area of the stadium. The software can remotely control the broadcast content and volume of each terminal. The host in the computer room has monitoring function, which can monitor the broadcast of the selected area.

The broadcast sub-control room of the stadium can realize the remote control of the broadcast through the computer, including long-distance speech to all zones, a certain zone and groups. Through the sub-control software, it can achieve broadcast paging to all, partial or a single terminal.

The remote broadcast paging center or service hall can realize voice broadcast to any zone and any group, with background music playing normally in the other areas. The broadcast voice can be automatically recorded and saved.