1. System Connection Diagram
The emergency broadcast system is an important part of the construction of the public service system of radio, film and television, and plays an important role in public opinion guidance, government order transmission, information release and emergency broadcast. In order to meet the needs of the national public emergency early warning information release and the construction of the national emergency broadcast system, the emergency broadcast system can carry out the information release and dissemination of the people’s governments at all levels in response to natural disasters, accidents, public health and social security and other public emergencies, so as to ensure the safety of the people’s property to the greatest extent.
The Fengnan District Emergency Broadcasting Project includes 1 county-level platform, 16 townships, 41 neighborhood committees, and 444 natural villages. Joint control can be achieved. The townships and neighborhood committees use column speakers, and each natural village is equipped with 4 high-pitched horn speakers and other terminals for coverage. The system adopts TCP/IP, mobile 4G or wireless FM networking to cover transmission. 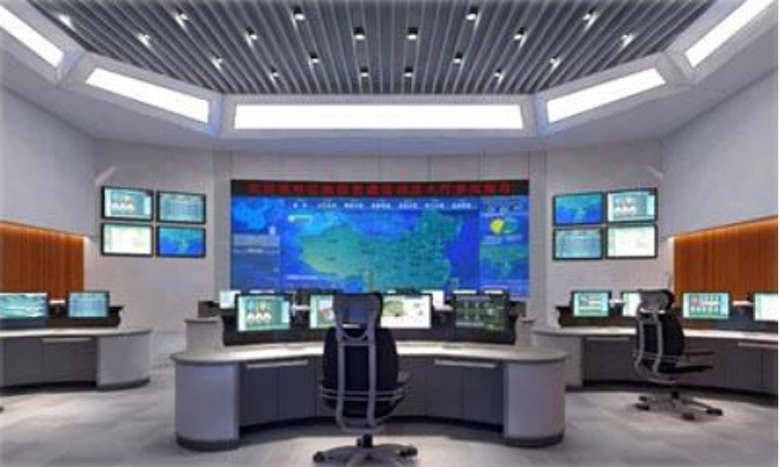 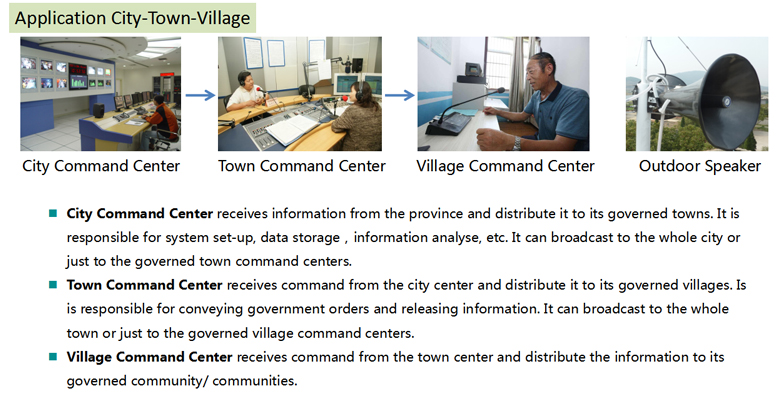 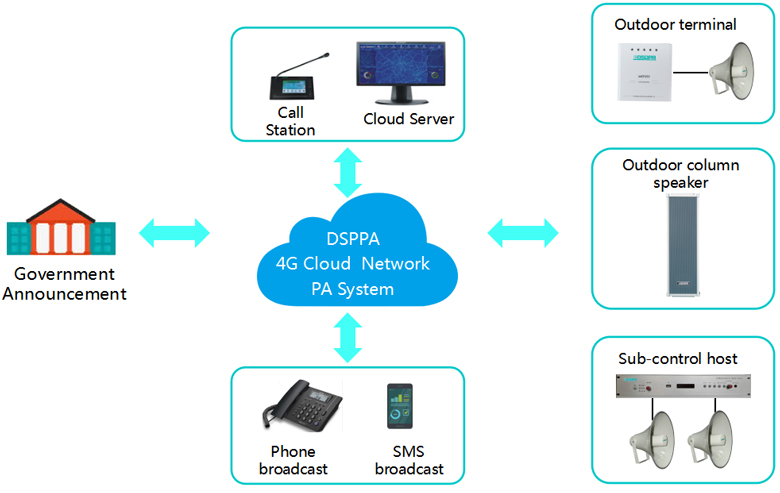 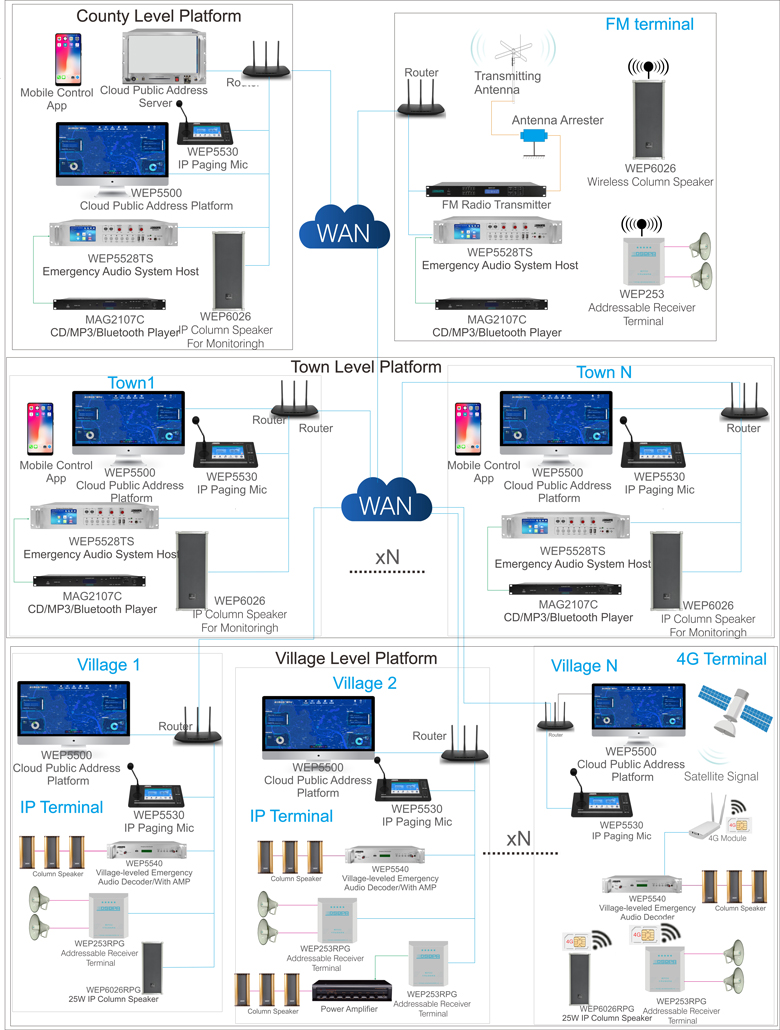 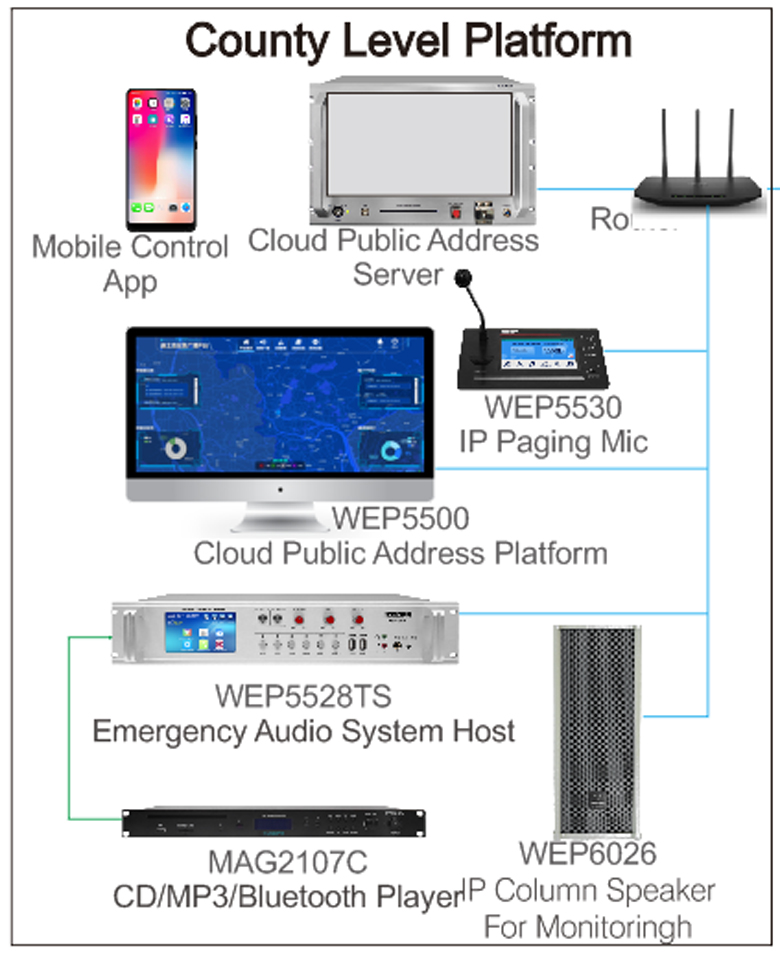 System Server
1. Self-built server:
(1) Configuration requirements
A server is provided if you purchase the platform software, which can carry less than 100 terminals. If more than 100 terminals, it is recommended to buy an ordinary server (like DELL R740).
(2) Bandwidth algorithm
Fixed public network IP plus one terminal 0.1M, so 100 terminals corresponds to 10m/bit upstream bandwidth.
2. Rent a cloud server:
The cloud server is open to the DSPPA cloud platform, and customers can rent our servers every year. We charge every year according to the number of terminals. We provide accounts for customers to log in (if you want to rent servers, we recommend renting our own servers).

FM terminal configuration method
Hybrid solution integrating IP+RDS
The audio signal is sent to the administrative village in the form of data packets, and the broadcast signal can be converted into RDS signal by the RDS codec function of the broadcast control host, which is modulated and amplified by the FM transmitter, and sent to each broadcast point in a wireless manner, so as to solve the coverage problem of the last mile of broadcasting. 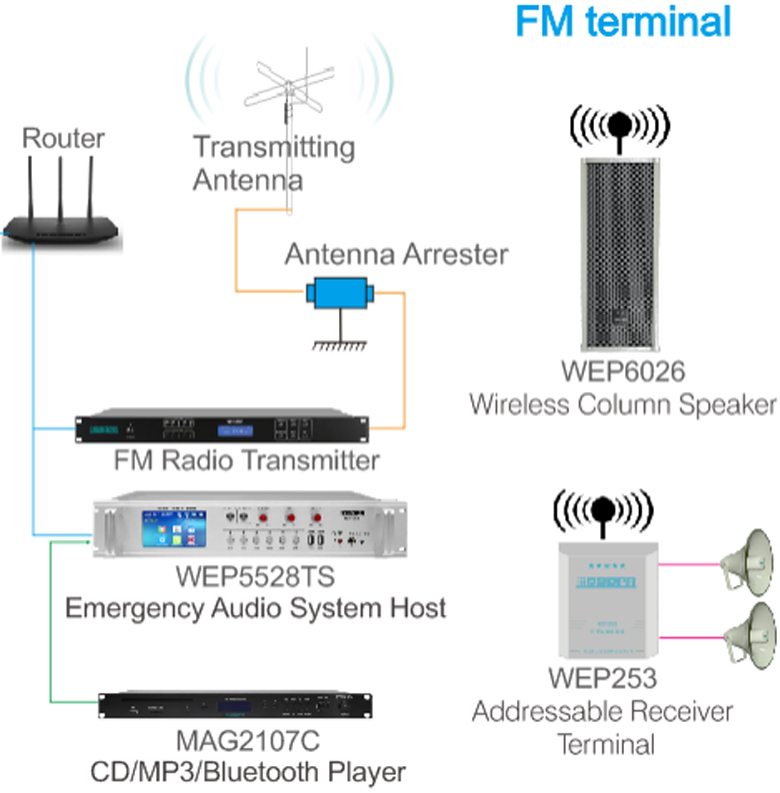 IP wired terminal configuration method
The audio signal is transmitted in the form of data packets on the local area network or wide area network. 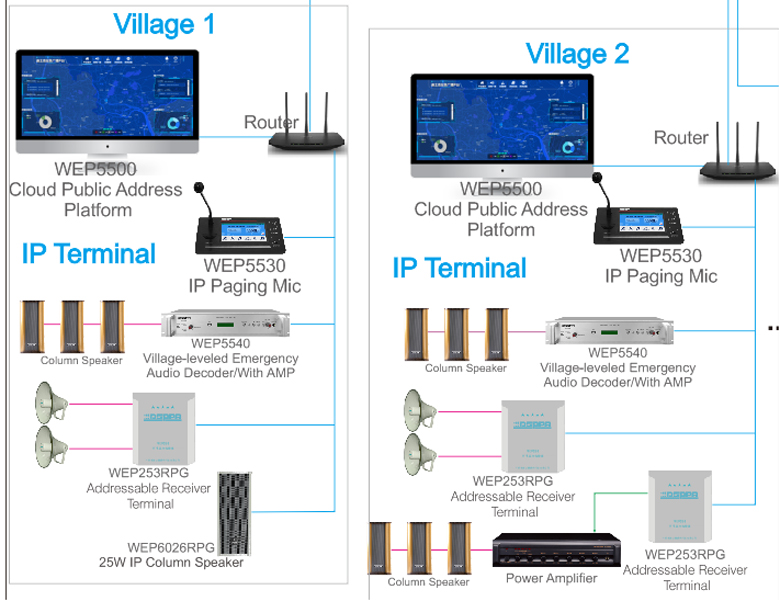 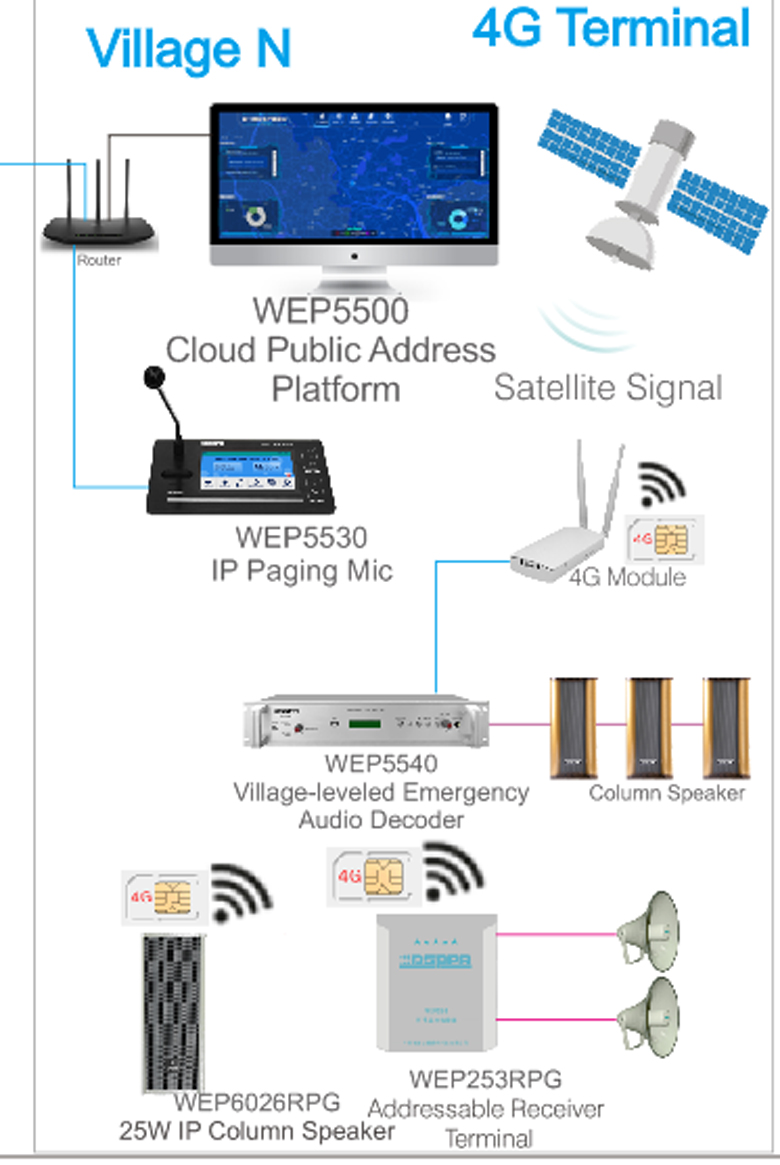 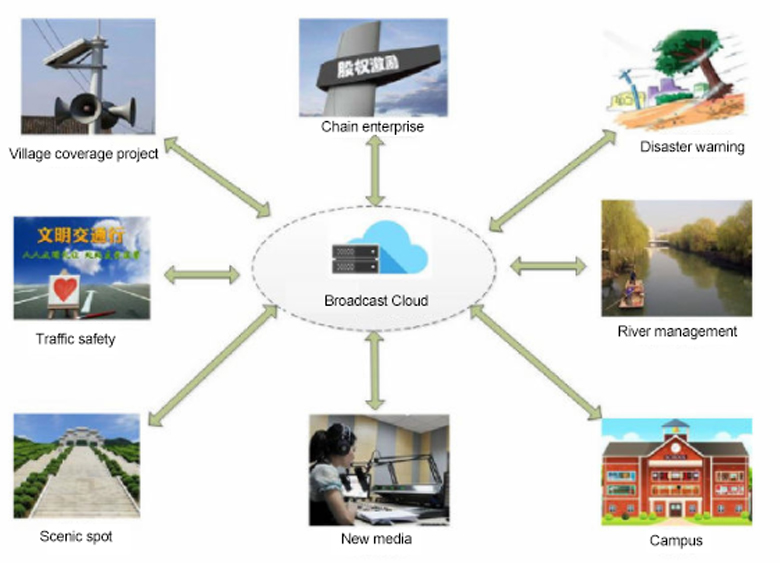 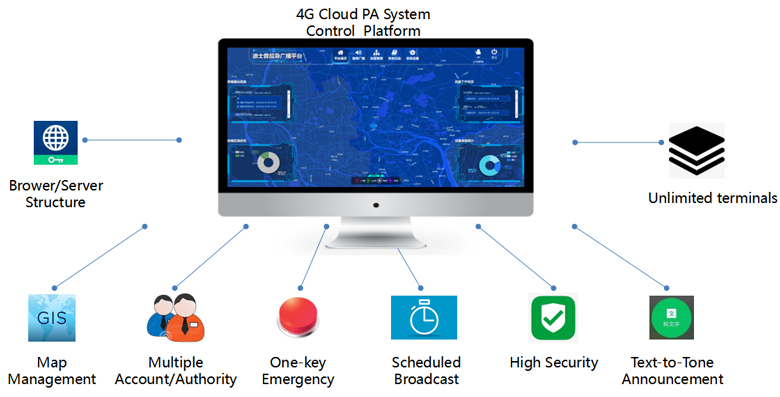 Feature:
1. Platform architecture:
The system platform adopts the B/S (Browser/Server, browser/server model) architecture design. This model unifies the client and centralizes the core part of the system function to the server. The browser can interact with the database through the Web Server.
2. Docking advantages:
The system can directly connect with the higher-level intelligent broadcasting platform, accept the control of the higher-level broadcast control center, and forward the emergency broadcast information sent by the national and provincial emergency broadcast systems.
3. Traceable records:
The system platform can record system log occurrence time, operator information, operation content and other information, record system alarm information and its occurrence time, and process alarm information.
4. Equipment network management monitoring:
Equipped with front-end equipment network management, it can remotely monitor and set the working status and working parameters of the equipment, and automatically prompt the failure of the monitored equipment.
5. GIS map supervision:
It has a map interface to manage terminal coordinate information, providing more intuitive online, offline, and terminal statistical information.
6. Security:
The audio signal adopts a digital audio coding format, and the audio signal and control signaling must be authenticated and encrypted for transmission, with anti-attack and anti-tampering mechanisms. The receiving terminal has the advanced anti-interference function, effectively preventing illegal broadcast insertion and intrusion.

Feature:
1. Audio output signal switching function:
Support the switching of U disk, SD card, microphone.
2. Hierarchical broadcasting:
Support five-level joint control mode. The number of joint control levels can be tailored according to requirements.
3. Broadcast mode:
Support simultaneous broadcasting of normal broadcasting and emergency broadcasting. Support broadcasting modes of single terminal, zone terminals, all terminals.
4. One-key emergency broadcast:
The emergency broadcast button can directly broadcast the preset alarm audio file, and can be set as an air defense alarm.
5. Intercom function:
Support the intercom function between IP microphones, so that two IP microphones in different locations can talk and communicate with each other.
6. Timing broadcast:
Support 100 timing programs, which can play the specified song regularly and specify the lower-level receiving terminal to play it.
7. Record traceability:
Support local query of the broadcast control record, and can keep the broadcast record within 1 year at most.
8. System docking:
Support RS232 and RS485 communication interface, which is convenient for docking with fire broadcasting system and intelligent central control system.

Feature:
1. High integration:
It integrates receiving, encoding and broadcast control management functions. It can receive signals such as IP, built-in programs, FM, satellite receiver, DVD, USB, microphone, etc. The priority of the input signal source can be set on the panel and in network management. The signal source can be automatically detected and switched. If the first signal source is interrupted, it can be automatically switched to the second signal source to broadcast, and so on, and if the first channel signal is restored, it can be automatically switched back; at the same time, the input signal source can be quickly switched on the panel, such as the microphone, U disk, FM and other signal sources, which are clearly marked on the front panel.
2. Record traceability, with telephone and SMS functions:
It has the storage function of emergency information (telephone, SMS, DVD, U disk, microphone input), and can store emergency broadcast records in the equipment, which is convenient for query and traceability.
3. One-key emergency alarm switching:
It can be set as air defense alarm, etc.. The alarm will be broadcast automatically after pressing the key. Also, it can be set as a microphone broadcast.
4. Timing broadcast:
There are 8 sets of timing programs, with each set of 255 timing points. The timing points can be used for timing broadcast. The U disk, line 1, line 2, built-in programs can be used as program sources, and designated to play in a specific zone.
5. Zone management:
Support 240 zones to modify the volume individually and open the terminal individually.
6. Run without the server:
It can be separated from the server to broadcast by FM.

Feature:
1. Integrate receiving, encoding and broadcast control management functions, with high integration.
2. Can receive IP, FM, line 1, line 2, USB, microphone and other signals, such as the switching of microphone, U disk, FM and other signal sources.
3. With telephone input and SMS receiving function, with USB playback function; with high priority for telephone and SMS input.
4. Local source (microphone, U disk, line input, FM receiving signal) broadcast loop.
5. There are display screen, digital buttons, status indication, monitoring volume control, microphone volume control, which can adjust the volume according to the actual situation, and a microphone input 6.35mm interface on the front panel of the device.
6. There are ground, wired, FM signal radio frequency input, IP (RJ45) input and output ports, 2 audio line inputs, 1 audio line output, 1 RS232 serial port, and 1 optional 4G full Netcom wireless mobile phone module, 1 RDS output, 1 220V/5A controlled power output on the rear panel of the device.
7. Support broadcast by priority. Emergency broadcast has the first priority, and emergency can be carried out through telephone, text message, and microphone. Only authorized calls can be connected for emergency.
8. It has a security verification function, and uses a hardware digital signature module to realize emergency information processing.
9. With built-in monitor speaker for high-fidelity signal source monitoring.
10. With the ability to return information, it can return the working status of the equipment and the response of emergency broadcast messages to the higher-level platform.
11. The column speaker, amplifier and other terminals can be switched on and off, and the volume can be adjusted on the front panel.
12. Modular structure design, convenient installation and maintenance, beautiful appearance.
13. The user environment and conditions are fully considered in the design, and 24-hour work and unattended operation can be realized.
14. With power-off memory function. When the device is turned on again, the device can automatically play the program before shutdown.
15. WEP5540 with 120W power output. 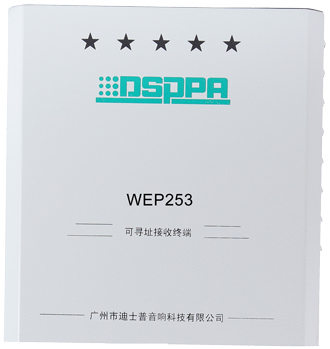 Feature:
1. Multiple backup and receiving methods:
It can receive IP//RDS radio frequency signals, decode the control commands issued by the higher level, with dual-mode IP and FM backup receiving function; support IP network management or optional 4G module, and can support China Mobile, China Unicom, and China Telecom.
2. Status return:
It has the function of wireless returning of status data to the mobile app.
3. USB port communication:
It is convenient to expand the Bluetooth communication module, 4G network module, and outdoor advertising screen function.
4. Remote control:
It can remotely control the operation of the machine switch, volume adjustment, frequency switching and so on.
5. Power output:
The rated output power is 25W 8Ω and 50W 4Ω. An external speaker can be connected.

Feature:
1. Multiple backup and receiving methods:
It can receive IP//RDS radio frequency signals, decode the control commands issued by the higher level, with dual-mode IP and FM backup receiving function; support IP network management or optional 4G module, and can support China Mobile, China Unicom, and China Telecom.
2. Status return:
It has the function of wireless returning of status data to the mobile app.
3. USB port communication:
It is convenient to expand the Bluetooth communication module, 4G network module, and outdoor advertising screen function.
4. Remote control:
It can remotely control the operation of the machine switch, volume adjustment, frequency switching and so on.