The Mosque can accommodate very large number of prayers and usually everyone prefers to pray in the mosque. The Holy Qaran which is recited at the mosque is heard by all the people who are living in the same community. Hence, it’s important to have a better mosque sound system that can produce a pleasant audio quality.
DSPPA MA2250U is specially designed for mosques - the perfect choice for every small and medium-sized mosque sound system. It has two built-in 250W amplifiers and a mixer with digital sound processor, as well as a built-in effector. Besides, it has multi-channel MIC inputs with reverberation effect, and it can be externally connected to Azan audio, with MP3/Bluetooth and other audio sources optional. The amplifier has two channels of constant-voltage and constant-resistance outputs, with independent volume adjustment for each channel. Therefore, it is an integrated system that can best meet your various requirements. 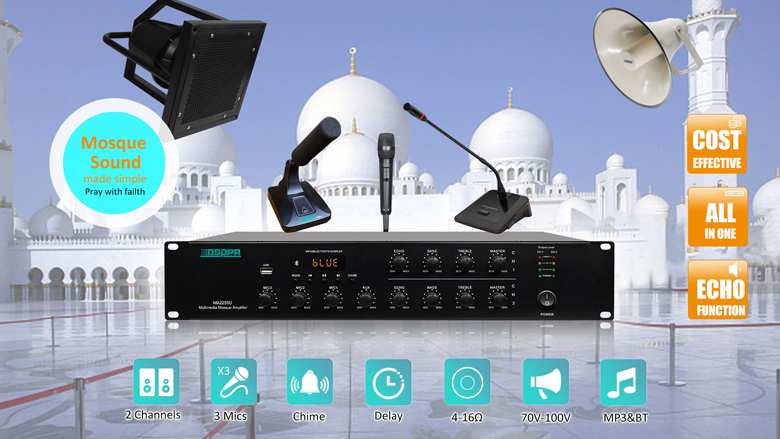 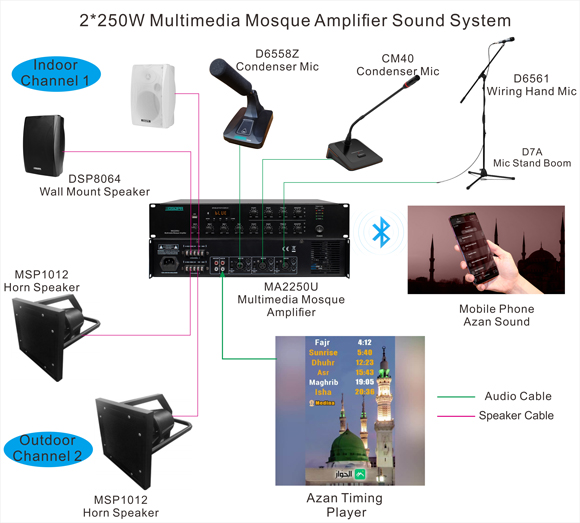 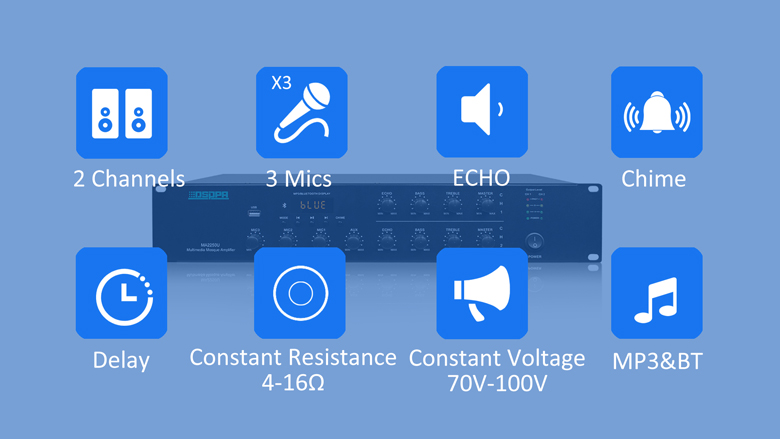 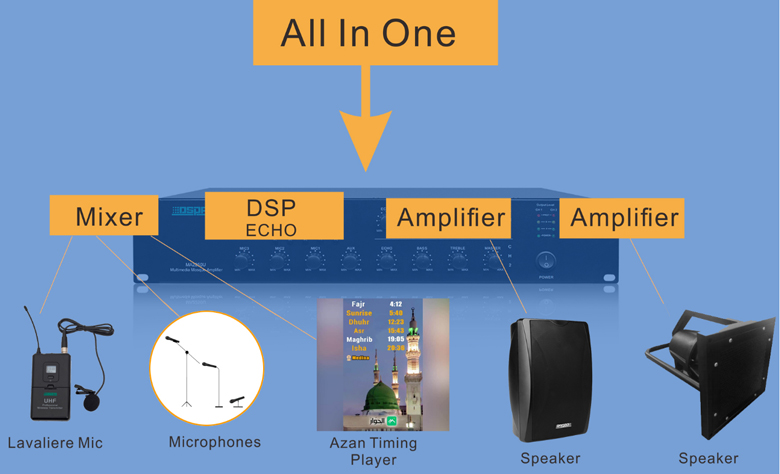 MA2250U is a 2-channel multimedia mixer amplifier for mosques, with RMS power of 2*250W. Support separate control of Echo/Bass/Treble/Volume for 2-channel ouputs,  with built-in 3 MIC, 1 AUX and USB/Bluetooth. MA2250U is the perfect choice for your mosque.

Better than other mosque sound systems: 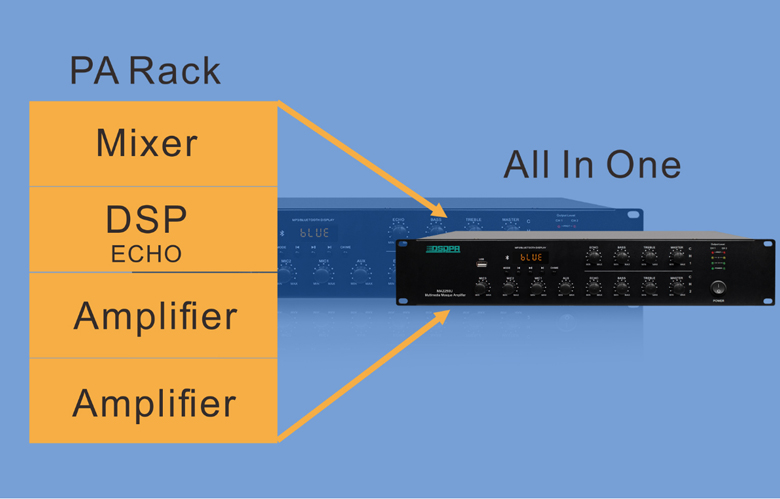 Generally, the mosque sound system consists of sound amplifiers, horn speakers, ceiling speakers, sound mixers and microphones. Since the quality of these equipment varies from brand to brand, the price of the sound system is based on the quality, and the complicated sound system setup and different microphones will cause more sound quality problems, DSPPA has designed an integrated power amplifier MA2250U specially for small and medium-sized houses of worship. 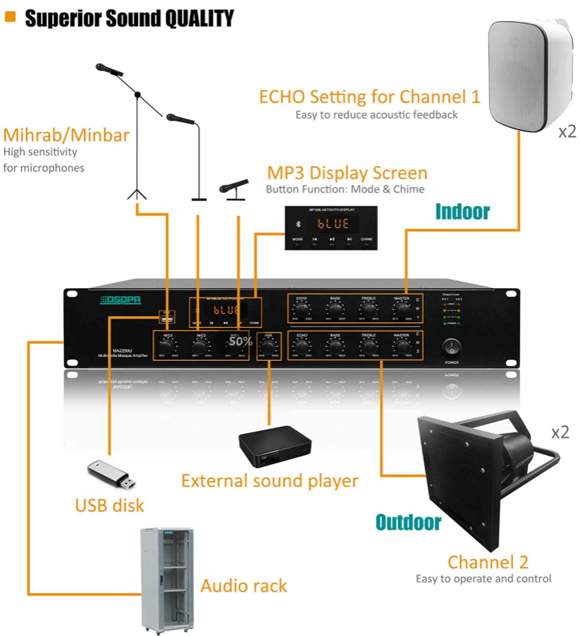 The voice of Imam should be sent to every worshipper in the mosque, and must be clearly heard in the farthest corners. Therefore, microphones and speakers should be carefully selected and installed according to the architectural and acoustic characteristics of the mosque.
However, most of mosques are rarely considered from the acoustic aspect, so the echo, longer reverberations of sound and feedback will affect the intelligibility of Azan and Khutba. 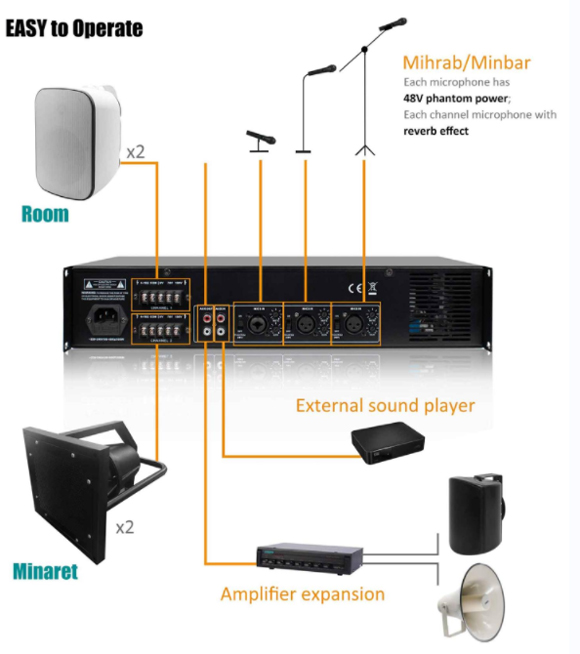 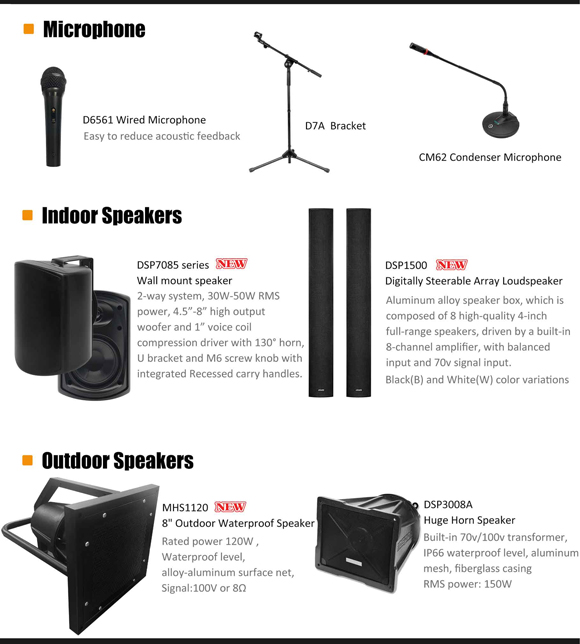