Usually larger in size and has a stage, movable seating and a separate control room. It combines modern professional audio facilities, multimedia display equipment, high-definition video recording technology, intelligent centralized control, stage lighting and other various functions in one, and has been rapidly popularized and application, which is very suitable for China's national conditions. Multi-function halls are usually set up in large and medium-sized enterprises and institutions, government agencies, exhibition centers, business hotels, training centers, schools and other places.

1. Functional description of the digital conference system in the multi-function hall:

The sound reinforcement system of the multi-function hall can be divided into two parts: the conference system and the sound reinforcement system. The conference system can have popular modern conference functions such as speech discussion, voting, simultaneous interpretation and so on. The seats for speaking and discussion can be arbitrarily increased or decreased according to the scale of the meeting, and at most hundreds of people can participate in large-scale meeting discussions.

At the same time, the conference system also has a variety of speaking modes, such as: first-talker first, second-talker first, chairman alone control, timed discussion, free discussion, voice control, manual, etc., to provide participants with a more convenient way of meeting. The voting function can be easily selected by pressing a button, and the voting results can be counted and displayed in real time, which greatly improves the efficiency of the meeting. 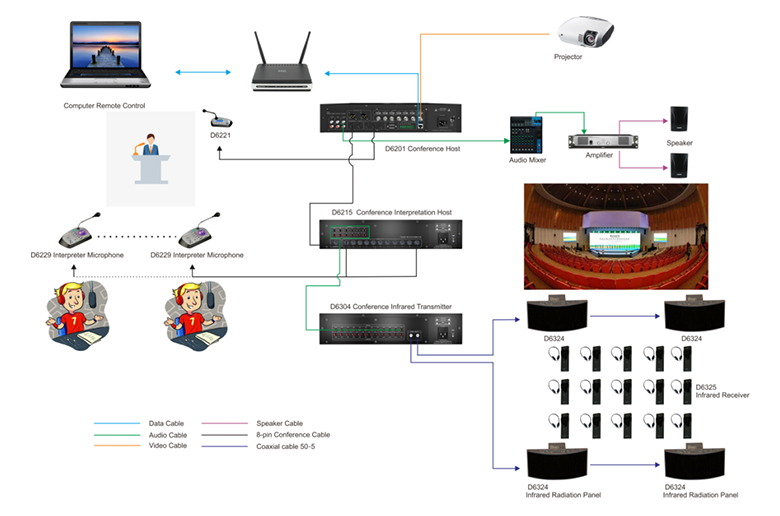 The simultaneous interpretation system usually adopts the infrared wireless transmission method, which can translate dozens of languages of different countries at the same time, and realize the wireless listening system of hundreds or even thousands of people.

The sound reinforcement system in the multi-function hall is mainly to provide excellent sound effects when playing movies and theatrical performances. Usually a dozen or even dozens of speakers are selected for sound reinforcement according to the size of the hall and functional requirements.

In addition, the system should also include wired microphones, wireless microphones, DVD players and other audio source equipment, as well as control and processing equipment such as mixers, digital audio processors, equalizers, and effects, and appropriately increase or decrease according to the functional requirements of the multi-functional hall . If a karaoke song ordering system is added, the entertainment function of the multi-functional hall can be enriched. If the functions of the whole system are more complete, related recording, video recording and other equipment can also be added.

2. The digital conference system from a technical point of view

The system of the multi-function hall has certain complexity in design and construction, especially for the user's use, there are certain technical requirements. This requires a technology to comprehensively manage A/V devices with different functions to make them work in harmony with each other. This technology is the intelligent centralized control technology. It can control lighting, audio, video display and other equipment through the touch screen, providing a more convenient control method for the use of multi-functional halls.

For the lighting in the multi-function hall, in addition to the basic lighting required for daily use, some stage lights can be appropriately added to add more dazzling visual effects to theatrical performances.